What if Cesc Fabregas and Nasri leaves Arsenal

Cesc Fabregas and Samir Nasri are heavily linked with moves to other clubs. Cesc Fabregas has been linked for a long time for his return to his childhood club, Barcelona FC, for the last three summer transfer windows; while Samir Nasri, who only has one year remaining on his contract, has shown his desire to move from Emirates Stadium. Manchester City has offered twenty two million pounds to lure the Frenchman who moved to Arsenal from Marseille in 2008.

They both are integral part of Arsenal FC. Fabregas usually plays behind the lone striker, while Samir Nasri is the owner of Arsenal's left flank territory. What if both of them leave? Could Arsenal survive?

What if both of them leave? It would be a big problem for Arsenal. Both of them are the source of creativity alongside Jack Wilshere. Last season, Arsenal without Cesc wasn't as strong as Cesc. No player could make a killer pas like the Spaniard do. Jack Wilshere is a good passer but he is yet to be as good as Cesc. Wenger himself already admitted that Arsenal wouldn't be considered as a big club if both of them leave. Nah, Arsenal should sign another world class player then.

Many pundits have suggested Arsenal to reverse their formation back to 4-4-2. Either Theo Walcott or Gervinho will duet with Robin van Persie. However, this is not the best solution, without any more signing. Arsenal would probably buy another right midfielder, even if Ryo Miyaichi could be tried in that position. Wenger has reported to be interested in Stewart Downing, and if he comes in, Gervinho is likely to play on the right. Wenger also keeps his eye on Esteban Granero, a Spanish Real Madrid player

However, in my opinion, Wenger should buy someone better than Downing and Granero. Arsenal need a world class player. Without any disrespection, both of them are good, but not world class. Arsenal have already some good players : Arshavin, Miyaichi, Ramsey. It is likely that Arsenal won't sign any other world class forward, no one has been strongly linked with the Gunners. If so, Ryo Miyaichi would have breakthrough season this year.
Posted by Eugene Gooner at 5:42 AM No comments:

On the end of the 2010/2011 season, Arsene Wenger said that Arsenal would have a busy transfer windows, which means every Gooner eagerly wait which player Arsenal would bring in. However, until now, seems Arsenal hasn't move well in this summer, with only buying Carl Jenkinson, a right back who is also able to play on the central of the defense from Charlton Athletic.

No one denied that Arsenal need to strengthen their squad. Arsenal looked really vulnerable at the backline and seems need more depth in their squad. Arsenal was quite promising in the beginning in of June. Media claims Arsenal have reached agreement with Ricky Alvarez, an Argentinian versatile right midfielder from Velez Sarzfield, and Gervinho, an Ivorian winger from French champion, Lille. Alex Oxlade-Chamberlain was also said nearing a move to Emirates Stadium. Then duo Blackburn's Christopher Samba and Bolton's Gary Cahill were said only one step away from Arsenal.

However, among those targets, there's no one officially goes to Arsenal. Even Arsenal finally lost Ricky Alvarez, who eventually chooses Internazionale as his destination. It is said that Arsenal doesn't want to spent 10 million on that promising player. He could develop into a 20-million-valued player in the next three years!

The bad news doesn't only come from the "into Arsenal" side. Arsenal is in verge of losing some key players because of lack of throphy. Gael Clichy already left the club with only seven million pounds. The skipper Cesc Fabregas would probably the next player who leaves Emirates this summer. The next is Samir Nasri, whose contract is only one year left. Nasri probably would move to the rival Chelsea or Manchester United, or will reunite with Clichy - to Manchester City. Robin van Persie already expressed his disappointment, could probably get out from Arsenal this season. Theo Walcott is targeted by Chelsea new manager, Andre Villas Boas. Galatasaray has already thown a 13.5 million offer for Arshavin. It would be very bad for Arsenal if all of them leave Arsenal.

Well, classic problem, money. Not only in transfer but also in the wages. Nasri wants more than 90000 pounds a week, and Wenger doesn't allow it. Arsene Wenger is too tight with the money. Every player has his own value. If you're good, you might get a good salary, that's logical.

Sometimes Wenger is right not to buy some overpriced player, but sometimes it's necessary to spend a huge amount of money to buy a world class player. A world class player usually wouldn't be available only for one million pounds.

Arsene Wenger might need to learn to spend money. Now it's up to him, whether Arsenal could win another throphy or not. It is true that money couldn't buy throphy, but with money you CAN transfer good players who would help you win the throphy. Remember, big spend meaning a big loss in the beginning, but if you can win a throphy, you could get back what you've spend, even plus the prestige! So, Wenger, with the money available from the board, don't be too tight with the transfer budget spend some money for the waited-so-long throphy! 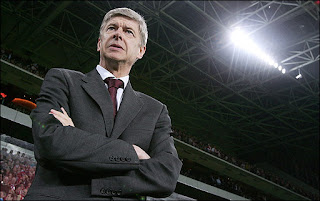 Wenger might need to spend (pict source: sportsnathletes.com)
Posted by Eugene Gooner at 5:18 AM No comments: